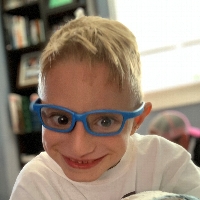 Thank you for this opportunity to share with you the story of a truly extraordinary boy, and an incredible opportunity to participate in a fundraiser for children, and their families, involved with The Children's Hospital of Philadelphia (CHOP). This non-profit organization was started by James’ family with the hopes to help other families going through similar situations.  Donations received will be directly placed into a fund at CHOP to be utilized by the Metabolism Department. Through this fund families will be able to receive financial support for necessary medical supplies that are not otherwise covered by insurances. Children, like James, with rare disorders often require a specialized medication regimen and diet which is often expensive and not a covered benefit with most insurances. Families struggle to provide their children with what is medically and nutritionally vital to their well-being. It is our sole focus to provide support to the children, and their families, so they can thrive. To provide you with an understanding of where our drive comes from, here is the story of our happy warrior James.

Floating-Harbor syndrome (FHS) is an extremely rare genetic disorder characterized by a distinctive facial appearance, various skeletal malformations, delayed bone age, and expressive and receptive language delays. The specific symptoms and severity FHS can vary greatly from one person to another. Treatment is symptomatic and supportive. Floating-Harbor syndrome was named after the two hospitals where, during the 1970s, the first cases were identified and reported in the medical literature; namely, the Boston Floating Hospital and Harbor General Hospital in California.