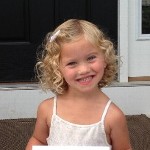 Jillian turned 4 in March and has led a wonderful and very healthy life. In early April she developed what was initially thought to be Bells Palsy. After 10 days her Bells Palsy did not improve. On April 12th Jillian woke up and had a hard time doing walking, balancing, and overall an off day. We took her back to her pediatrician and after seeing her sent us directly to CHOP to figure out what was happening. After a CAT scan was performed, they found a tumor. She completed a 4 hour MRI to determine what the extent of the tumor was. On April 14th we met her amazing team of neurology and oncology doctors to hear devastating and heart breaking news that no child should ever have to endure. It was not just one tumor but numerous complicated brain tumors along with her spinal cord also having lesions. Up to this point she had no pain and has been virtually asymptomatic which is the true definition of her character. Many of the tumors in her brain are not able to be touched or operated on based on the proximity to critical nerves. On April 15th Jillian underwent two brain surgeries. And on April 20th the pathology results returned. It is disseminated  medullablastoma and very advanced. Her prognosis is 50/50 but it's something!

The treatment route we are going is very intense chemo. Jillian will be on chemo for 6 treatments (first three regular and then the last 3 stem cell recovery). Jillian will be evaluated after each treatment and we will fight as long as she does. If at anytime we feel her life is compromised or it's not working we will discontinue and make her as comfortable as possible.

We ask that you pray for a miracle, strength, and most of all, courage.

For now we remain strong and comforted that Jillian is the definition of what a fighter and true warrior princess are made of. She exudes happiness and smiles and this has  helped us through all of this news. We know that she will persevere and with your prayers and continued support this girl is gonna kick cancers butt! We are gonna have the celebration of a lifetime when this girl rings the bell! The constant support that you have all given is something we can't ever thank you enough for.