Bryce's Day at the Park 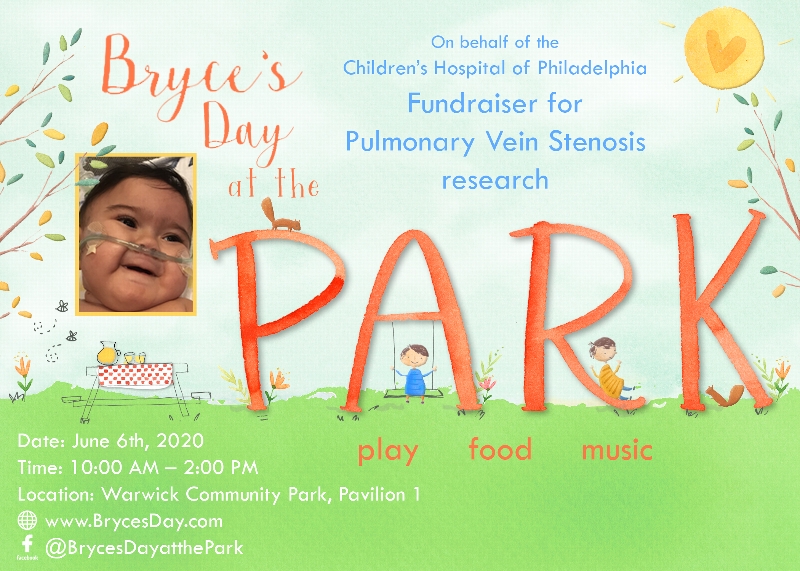 Bryce Louis Mongillo is an identical twin to Lucca Joseph Mongillo.   Since the beginning, he fought to live.   In utero, he was diagnosed with a congenital heart defect, coarctation of the aorta.  Defying so many odds, our two little boys arrived on April 28, 2017 with pretty strong cries despite coming two months prematurely.  Bryce was transferred to the Children’s Hospital of Philadelphia (CHOP) and had heart surgery at one month old to fix the congenital heart defect.  Shortly after his surgery, Bryce was diagnosed with a rare disease that affected his heart and lungs called Pulmonary Vein Stenosis (PVS).  There are little options for kids with PVS, and with Bryce's case being especially aggressive we ultimately decided to list our boy for a double lung transplant.  We brought him home for one week in January and one month in April, the second was in time to celebrate a first birthday with Lucca.  We will always remember singing happy birthday to both our boys on a perfect day in April.  After showing signs of his disease progressing in May 2018, we rushed Bryce back to the hospital.  He rapidly declined and after intervening with every option available to no avail, we held Bryce until his little heart beat one last time on earth.

Despite such a hard life, Bryce was the sweetest little boy and remains so deeply loved by his family.   Bryce never did receive his gift of life.  After he passed away, he donated his heart valves to other hopeful children.  We knew that would be his final wish.

We, Paul Mongillo and Michelle Baker, are hosting a charity event, Bryce’s Day at the Park, as a means to honor his enduring legacy.  All proceeds raised from the event will benefit Bryce’s Fund, a PVS research fund we established at the Children’s Hospital of Philadelphia in his memory.  Open to family, friends, and the community, Bryce’s Day at the Park will be a day for families to have fun and make a difference in Bryce's name.

Registration for Bryce's event can be found here --> REGISTER

To learn about PVS and organ donation, check out these links: http://www.pvsnetwork.org/ and https://www.donatelife.net/