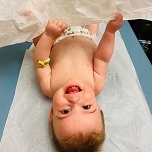 Cole Joseph Princehorn was born on November 30th, 2020 and seemed to be a healthy thriving baby. Unfortunately, at his two-month appointment, concerns heightened surrounding his continued jaundice. Our pediatrician immediately ordered labs and we rushed him to get blood tests. The call we would get a short couple of hours later would send us on the most frightening and difficult journey we could have ever imagined. The tests found that Cole’s bilirubin count was alarmingly high, and we would need to get in front of specialists immediately.

We were rushed to CHOP, and Cole started to undergo a variety of tests all indicating to an issue with his liver. It was very apparent that this was a serious problem. After a lengthy hospital stay, all the tests and imaging concluded that a procedure would be the only way to truly identify what was going on with Cole’s liver. That procedure turned in to a 7-hour surgery where it was found that Cole had no ability to drain bile from his liver to his intestines. He was diagnosed with Biliary Atresia, a rare liver disease that we had never heard of.

The next 15 months would be unimaginably difficult, but thanks to the amazing people at CHOP, Cole has made amazing progress and continues to take steps in the right direction. He is now almost 15 months post operation and still has his native liver. We do not know what the next day will bring, but thanks to everyone at CHOP, we know we will have fantastic people in our corner and the support from the best team for Cole and our family we could ask for.

Cole’s Goals was created to help raise awareness about Biliary Atresia, other liver diseases and to fundraise for The Children’s Hospital of Philadelphia’s Liver Research Foundation. We cannot thank everyone at CHOP enough for their continued commitment and dedication to our son.