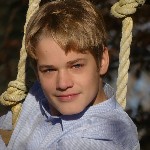 You can make a huge impact for CHOP Research!  During the month of November 2019 through #GivingTuesday (December 3, 2019) the James & Angela Ryan Charitable Fund will DOUBLE your donation*!!   Many employers will also match charitable donations which could mean you could TRIPLE your donation!!!

On August 10th, 2015 Edgar was typical 12-year old boy who had been digging a tunnel in the wet sand of an eroded beach on Long Beach Island (LBI) New Jersey.  Unexpectedly the tunnel collapsed on him drowning him in sand and stopping his heart.  Bystanders and the Surf City Beach Patrol pulled him out and performed CPR to resuscitate him.  Edgar was flown by Medivac to the Cooper Trauma Center where they worked on him for a few hours trying to stabilize him.  Unfortunately, this was not possible because Edgar's lungs were severely damaged, filled with sand and no longer able to function. Traditional ventilators were not enough and the Cooper doctors said that Edgar’s only hope was a medical technology known as ECMO.

Thankfully the Children’s Hospital of Philadelphia had ECMO available and one of the top ECMO medical research staff.  Edgar was immediately transferred to CHOP and placed on the ECMO machine.  It was one of the first times that ECMO was used as a possible solution for sand aspiration.  ECMO was used as a full lung bypass providing CHOP doctors the ability to keep Edgar sedated and continually remove sand from his lungs.  Eventually his lungs healed enough to be supported by ventilators, and ultimately healing completely and Edgar could breathe on his own again.

Most sand aspirations end in death, but ECMO technology and CHOP’s medical team saved Edgar’s life.  Edgar was one of the lucky ones.  Not only surviving but experiencing a full recovery without any lasting side effects.  As amazing as ECMO technology is, it still requires more research and development.  Today only 50% of all children placed on ECMO will survive.

Learn more about Edgar's story by clicking on the link.

Four years later Edgar is healthy, happy high school senior who is one of the top students holding a cumulative 4.0+ GPA.  Edgar’s passion is engineering and he shares his skills and leadership with the school’s robotics team, tech crew and private charitable missions.  Edgar is actively pursuing his dream engineering colleges. What is ECMO?

ECMO (Extracorporeal Membrane Oxygenation) is a procedure that uses a machine to take over the work of the lungs and sometimes the heart for temporary life support of patients with potentially reversible cardiac and/or respiratory failure.  ECMO is used as a last resort when other options have been ruled out.

While ECMO is not a cure for the underlying cause of cardiac or respiratory failure, it does allow time for recuperation and/or response to conventional therapies.

Learn more about ECMO Research by clicking on the link.

Why this CHOP Research Fund?

The mission of the Edgar Ryan ECMO Research Fund is to support innovations of extracorporeal support for life-threatening illness in children.  Extracorporeal life support refers to the use of ECMO or other techniques to provide oxygenation, ventilation, and circulation of blood for patients with respiratory and/or cardiac failure. Similar to cardiopulmonary bypass during surgical procedures, ECMO can completely support the heart and lungs for days to months providing critically ill children a bridge to heal and overcome critical illness. Without this support they would not survive.

The use of ECMO is increasing in both adults and children, especially for respiratory failure.  In 2015, nearly 8,000 patients were placed on ECMO according to the Extracorporeal Life Support Organization (ELSO) registry.  This number continues to grow every year.  Despite the growth in utilization there is still considerable work to be done to improve outcomes for this burgeoning field. Nearly 50% of all patients placed on ECMO will not survive to hospital discharge.

This fund is critical to help translate research and development of technologies and therapeutics to support heart and lung failure while preserving neurologic integrity and outcomes in the most critically ill children.  This will be accomplished by supporting the extracorporeal life support laboratory and clinical research mission of the ECMO Center at the Children’s Hospital of Philadelphia. Our team is composed of international leaders in life-support models development and continue to redefine clinical indications and pathways for extracorporeal life support.