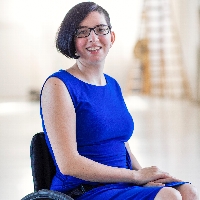 My name is Lauren Arena.  I am 28 years old.  I have a very rare condition known as MEAK (myoclonic epilepsy and ataxia due to potassium channel mutation).  This condition causes constant involuntary twitching of the muscles which can also lead to seizures.  It can render those who suffer from it unable to do the tasks of daily living without assistance. Those of us who have this condition eventually need to use a wheelchair for ambulation.  I am one of only 20 known cases of MEAK in the world.  I was the first one in the United States diagnosed with this condition.   After thirteen years of rigorous testing, consultations with some of the top doctors in the country, several misdiagnoses and many unsuccessful attempts at treatment, I became part of a study being conducted by several scientists around the world which led to the diagnosis of MEAK in November 2014.

I began to have symptoms at age 10.  Prior to that, I was an active child who enjoyed dancing, singing, acting, softball, swimming, horseback riding and karate.  At age 10, I had my first tonic clonic(grand mal) seizure.  Soon after that, I began experiencing myoclonic twitches, first in my hands and arms, then eventually in my legs and torso.  The quality of my speech also began to deteriorate.  The myoclonus became so severe that I eventually could no longer walk or feed myself.  By age 16, I was in a wheelchair and needed assistance with all functions of daily living.   I spent the majority of my childhood in hospitals undergoing extensive testing and trying numerous medications to try to alleviate my symptoms.  Some of these medications made my condition worse rendering me unable to speak or swallow without choking.  I became mostly bedbound and able to only eat soft foods and drink thickened liquids.   This debilitating condition left me feeling very isolated, but it did not diminish my spirit and determination.  I try to live with my condition every day with grace, dignity, a strong faith and a sense of humor.  In October of 2013, I joined Roll Call Wheelchair Dance.  The beginning was very challenging for me, the movement would trigger myoclonic attacks.  The hand holding required in ballroom dance was very difficult for me because my hands are very sensitive to stimuli, but I was determined to continue.  At first, my partners would hold me by the wrists. Eventually, I was able to hold one hand.   In July 2015, I started taking lessons at Dance With Me Studios.  From the very beginning, my instructor was determined to dance with me holding both hands.  Through hard work and a lot of practice, I can now dance with my partner holding both hands.  That was just the beginning.  Since that first lesson, I have now performed in several showcases and have done increasingly difficult choreography, including lifts!  I have also competed in my wheelchair alongside standing dancers at Dance With Me events in both New York City and Dallas. Dance has been very therapeutic for me both physically and emotionally.  It has increased my confidence and self-esteem and gives me great joy.  I have made many new friends and no longer feel the isolation I once did.

Besides the dancing, I also enjoy painting, baking, editing pictures and videos, and social media.  I love animals, especially dogs and horses.  I hope to go horseback riding again someday.  I have traveled to Italy, the Bahamas, Florida, Dallas and Las Vegas. I also work out once to twice a week with a personal trainer in order to keep my body as strong as possible.

On September 21, I was crowned Ms. Wheelchair NY 2020.  I will use this opportunity to be a role model to the disabled community, to spread my message that you should never give up on your dreams and to raise awareness about MEAK.  To follow my journey, visit and like my Facebook page Ms Wheelchair NY 2020 Lauren Arena.  For more information about my condition, please visit my Facebook page, Lauren Arena Foundation for MEAK Research.  My mom and I set up this page to spread awareness of my condition and to try to reach other MEAK families.

There is currently no cure or treatment for MEAK, however, Dr. Ethan Goldberg, Assistant Professor of Neurology at Children’s Hospital of Philadelphia is investigating potential treatments that target MEAK.  I am asking that you please make a donation to support Dr. Goldberg’s research efforts.